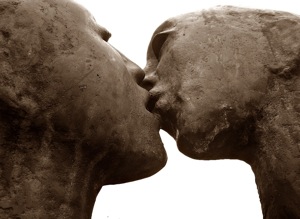 I’ve written a lot on this blog (here and here, among many others) about the mindset of depressed partners who are pulling away from their closest relationships. It’s important to look at the other side too – the desire to return. Hopefully, they’ll come back from the illness, whether they’ve remained at home while they’ve suffered through it or left to try to work it out on their own. A severe episode ends, and they want to have the relationship back.

That’s an exhilarating, joyful time when you can finally stop worrying and talking about what’s wrong and rediscover each other. That’s what my wife and I felt when I came back. (I had not left home but had been absent in every other way – hostile and careless about the relationship.) It was like starting over. My wife felt that too, but she had learned to be cautious after so much hurt and anger, and after many false-start recoveries.

The trust that a lasting relationship depends on had been broken, and it took a long time to get it back. Because my depression kept returning, trust was tested almost every day, but our relationship held through all my ups and downs.

A big reason we could stay together is that we both learned to watch for signs that I was slipping away again. I doubt we could have made it without cultivating a keen awareness. Even after the great renewal of our relationship, I had many recurring bouts with depression. You have to be prepared for that possibility, even though you may feel sure that it can’t happen again.

Here are some of those danger signals that most affected me.

In the excitement of recovery and renewed love, it was easy to believe I would never go through such a terrible time again. It wasn’t long before I pulled out of therapy. I felt great – who needed help? In walking away from it, however, I lost the objectivity of someone outside the relationship – and outside my head – who could help maintain awareness of how I was doing. A few years later, returning problems got bad enough that I finally started treatment again.

Treatment Will Cure Me

I went from one extreme to another. Instead of denying that treatment could help, I began to rely on it as the sole source of hope for getting over depression for good. Since my wife was so sensitive to even small changes of mood, I also relied on her to wake me up to the onset of another episode. On first hearing warnings, however, I would fall into the old habit of denying that I could possibly be getting ill again. Sooner or later, I had to admit what was happening. It took years before I fully took on the responsibility for self-care and learned skills to counteract the warning signs before depression took hold.

Why All this Talking?

There are few things as important in a relationship as talking to each other, about anything and everything, but especially about warning signs. Silence and holding back feelings were my first steps toward pulling away emotionally and isolating myself in full blown depression.

I Can’t Stand It!

Getting angry for no particular reason is a classic sign. Before a depressive episode set in, the surest way I could deal with it was to stop and ask: What’s really going on? I used to hear it first from my wife, but then I became alert on my own whenever a pervasive irritability came up. Awareness may not have gotten rid of it immediately, but I knew I wasn’t reacting to anything my wife was doing. Blaming was exactly the wrong thing to do. I could feel my own tension and try to work it off.

This Blank Wall Is Endlessly Interesting

Depression slows me down and helps me drift into inaction. An early sign is the highly pleasurable state of staring at nothing. I could do it forever, feeling full and content, happy to sit motionless. Why talk about anything – there’s nothing to do. I get sleepy and go blank. Psychiatrists refer to these states as vegetative symptoms. They had nothing to do with the stillness of meditation. I was stepping into an emptiness where nothing had meaning, and there was no point to moving a muscle. When I started floating like this, I had to break the spell by forcing myself to get up and do something.

I could go on and on with this list – getting jumpy and distracted, losing concentration, feeling a weight on my chest – but many are early signs of the other familiar symptoms of any major depressive episode.

Feeling the euphoria of recovery is one thing. Sustaining wellness and a close relationship is another. Working together to catch the warning signs of relapse is a way of strengthening the bond between partners.

What I’ve come to believe is that you aren’t so much recreating the relationship you shared before depression drove you apart. You’re creating something different – partly the renewal of an intimacy you’ve known but adding a realistic sense of what depression can do and what you must do to prevent it from taking over.

We learned the hard way that feeling better – even completely restored from depression – isn’t the full measure of recovery as far as relationships are concerned. Rebuilding trust doesn’t come from medication or therapy or endlessly worrying about depression. Instead it comes from doing things together, talking to each other – letting life happen – while remaining sensitive to signs of relapse.

This awareness, though, doesn’t mean you’re expecting or assuming that depression will return. That would be undermining, a self-fulfilling prophecy. What I’ve found in this process – and we still work at it today – is that we’re assuming wellness is the norm and taking steps to stay healthy, just as you’d get a flu shot.

Have you been trying to rebuild trust with a partner after emotional separation and shock? How have you been able to do this? What skills did you have to learn to prevent the same thing from happening again?

60 Responses to “Restoring Trust After a Depressed Partner Returns”